I'm an complete newb bbq with a million questions. I use a 57cm Weber kettle with Briquettes.

I had a very meaty rack of spare ribs ~ 2kgs in weight from Costco. I did a try brine yesterday night and today used a dry rub made of Brown sugar, white sugar, salt, pepper, garlic powder, onion powder, chilli powder.

Ended up cooking for ~4 hours uncovered - 2 hours foiled - 1 hour uncovered with intermittent saucing (sauce made of Brown sugar, tomato paste, rub contents, sauteed onions)
- Had to go 4 hours initially because temps kept spiking up to 300F+ at one stage had to take the grill and meat off to remove coals because temps would not go down with bottom vent completely closed.
- I had two water pans, one large one visible in the picture beneath meat and one small ones directly on grill above coals.
- I used 2x hickory chunks weighing prox 150gm and 2 small pouches of oak chips.
- I used the minion method 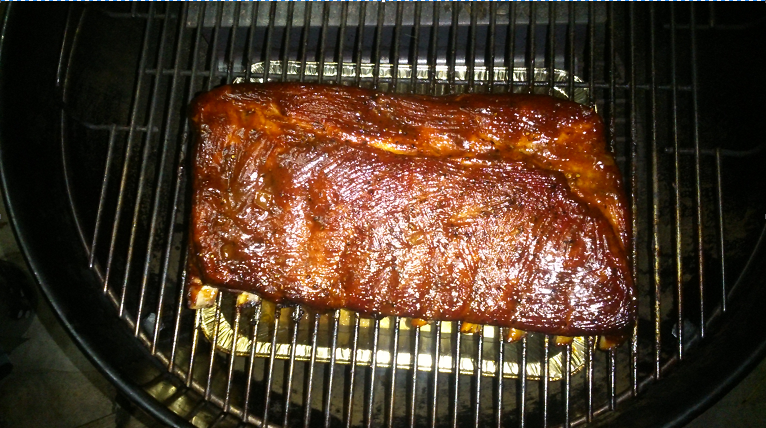 End result - Ribs had a really good flavour HOWEVER were dry, on the tough side (meat took abit to take off the bone). 'smoke' ring was less defined than the first time I made them. Smoke flavour much less as well.

Questions -
1. Were the ribs dry because temps were too high? I could never get it below 260F...

3. The wood chunks would not smoke until >290F...the chunks were placed on the grill directly above the coals. I also could not get the thin blue smoke and the smoke was mostly billowing white smoke (which made me remove the chunks several times). I tried placing the chunks directly on the coals in the middle of the cook but still only got billowing white smoke. The chunks eventually darkened to black.

My theory is that I used too many briquettes initially (1/2 the chimney) and the briquettes below ignited too quickly also resulting in high temps...which then resulted in me having to have the bottom vents completely closed > no oxygen > incomplete combustion of the wood > billowing white smoke.

Would my problem be solved if I used the snake method, started with fewer coals which would allow me to have the bottom vents mostly open > more O2 > better combustion of wood> better smoke?
Also does darkening of the wood to charcoal black mean its spent?

4. I just cannot get a nice black bark like all of the youtube videos, I doubled the amount of rub I applied this time too...

thats all I got for now folks!
Top

You seem to be nearly there but yes, it seems you might've used too many lit coals in the beginning. What kind of temp guage do you have on the kettle? One in the lid or one through the holes in the lid?
The temp difference between the grilling grates to the lid can be pretty significant, I suggest to buy a cheap oven style temp guage from a kitchen shop just for 2nd reference..they do go very brown after a while but give you a much clearer picture of what temp your meat is sitting with.

When I do minion with the kettle, I have a barrier between coals and meat, I used to use 2 paver bricks end to end which also acted as a heat sink (you'll have to set them up where the joining ends overlap as the kettle isn't wide enough for end to end) Place half a chimney of unlit coals in the fire end, then only 15 lit coals on top. You'll need the bottom vents about 20% open and top vents open. It's ok for the kettle to go to 250F but aim for 225F.

Foil at 3 hours as the meat won't take on any more smoke after then, foil for 2 hours after a good spritzing with apple cider vinegar and water,

after 2 hours totally unwrap the ribs and place back on the grill....after one hour, lift up one end of the ribs and where it bends underneath, see if it pulls away from the bone, if not, try again in 15 mins until it does....once you see the meat splitting undereathwhen you lift it...

Thanks, ill definitely start off with less coals the next cook!

Ive been using a cheap kettle thermometer from ebay, it is accurate within 10C when compared to another digital probe thermometer. I'll have to look into buying an oven style thermometer, but wont using it mean I have to keep lifting the lid?

. thats been my struggle though which may all be linked to too many coals, I can't crack the bottom open without temps spiking.

What do you think about getting the wood to smoke? will wood smoke at very low temperatures (~225) and should it be placed directly on the coals?

Thanks again, been reading snippets of your wisdom all over these forums!
Top

The smoking chunks should go directly on the fire/coals and should only smoulder which they will do when placed on a low temp fire, if placed on a hot fire, they will catch alight and bellow lots of white or black smoke.
The Iron may radiate too much heat onto the food and raise temps or burn the food.

As for the oven temp, yeah you need to lift the lid to check but place it where you can easily view it.....the viewing only needs to happen near the beginning of the cook to check on temp difference and maybe if you get a temp spike at the lid guage.
You have to life the lid when you have to foil the ribs, so it's just a reference....the grate temp is more important so if there is a 50F difference between lid and grate temps, then you'll be satisfied that if the lid is reading 275F, you'd be pretty much on the money.

Hey there when i was using my kettle i also used two tin cans about the size of beer cans they where my water pans didn't take up much space. Should also help keep them tender.
Top

haha that beer can idea is great, definitely will be substituting those for expensive aluminum trays.

The next one is definitely going to go much better, ill keep this forum updated!
Top
Post Reply
6 posts • Page 1 of 1