awesome , looks like you had a great day, there is something about making sausage/salami with Family & friends and enjoy some of last years product & a little vino or a ice cool beer. well done. MM

How good is that workbench table?
Top

Do they ever make scrapple with the scraps and trimmings ?
Burnt By The Best
Competition BBQ Team

Bentley wrote:Do they ever make scrapple with the scraps and trimmings ?

All breakfast snags mate
Only thre grades or product was made. Sausage, Mince, Salami.
With the exception of the extra sausage that I wanted made from the mince grade.

Now that Ive answered,, what is scrapple ?

Usually a mush of pork scraps and trimmings combined with cornmeal and wheat flour, often buckwheat flour, and spices. It is then formed into a loaf. Pennsylvania Dutch decedents brought it over, it is a Mid Atlantic, regional thing, Maryland, Pennsylvania, Delaware, New Jersey, Virginia, is being made more in the Southeast.

The traditional stuff was made of hog offal, such as the head, heart, liver, and other trimmings, (but if you have had true Boudin Balls [Pig Liver, Cajun stuff], you know that meat is strong) so more of just the trimmings are boiled with any bones attached (often the entire head), to make a broth. Once cooked, bones and fat are thrown away, meat is chopped fine, and cornmeal is boiled in the broth to make a mush. Spices are usually sage, thyme, savory, black pepper, but that is like BBQ, every place has its favorites. The mush is formed into loaves and allowed to cool, and then usually cut into a piece that looks like a slice of bread and pan fried.
Last edited by Bentley on Sun Dec 08, 2013 12:22 pm, edited 1 time in total.
Burnt By The Best
Competition BBQ Team 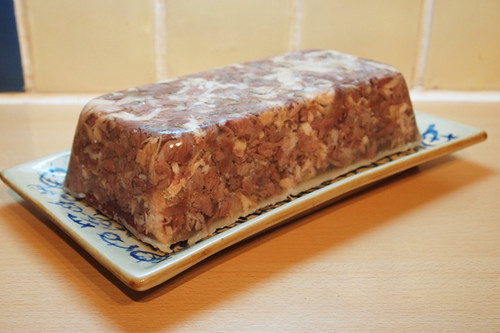 
If so, it seems more like what we would call head Cheese or even a reach on a pate...Scrabble, well it is more, kind of hard for me to compare it to much!
Burnt By The Best
Competition BBQ Team


If so, it seems more like what we would call head Cheese or even a reach on a pate...Scrabble, well it is more, kind of hard for me to compare it to much! 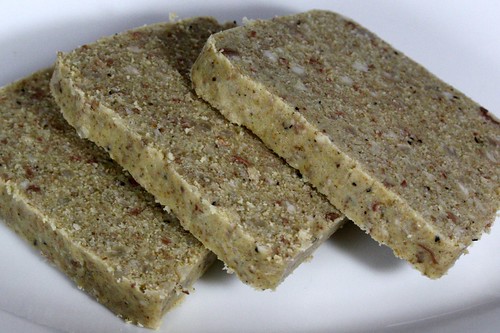 Cheers
Chris
Common Sense is so rare these days it should be a Super Power!
Top

mmmmmmmmmmmmm ...presswurst..
bloody hell , how can I say that in english?....

oh Smokey Mick..with that treat and those photos you just bring my memories back...I did grow up ..in society similar than that one..
Holly cow..how self sustainable we could really be if we did just a few things right...
Use to be a times..when you went to shop..just to buy ..a sugar, salt , cigarettes and matches..well.don`t forget yeast,or no bread for next week.

Thanks again SM, with that tread you make my day.

Mick do they ferment the hard salami? Did they use a culture in it?
Burnt By The Best
Competition BBQ Team

Hi Bro, yes this looks like our Brawn, but it is all Head Cheese, every country in Europe have a form of it with it own name and ingredients, But all ways with eirther pig's or claf's head. Karin's mum would also made Brawn which was based on vinegar called Sülze which have finely diced carrots, caspers, Gerkins & onion in her Brawn she learnt from her Grand mother in Germany before the WWII. and was made with a whole pig head less the brain and ear drums, a whole beef shin with bone, I will dig out her recipe book and make a batch.MM

In Australia, Head Cheese it is known as brawn or Presswurst

plus another thing that is very nice is Rillettes similar but the meat is cooked fat .

Below is extract from http://en.wikipedia.org/wiki/Head_cheese

In England and Wales, head cheese is referred to as brawn
In Scotland, it is known as potted heid

Head cheese or brawn is a cold cut that originated in Europe. A version pickled with vinegar is known as souse. Head cheese is not a cheese but a terrine or meat jelly made with flesh from the head of a calf or pig (sometimes a sheep or cow), and often set in aspic. The parts of the head used varies, but the brain, eyes, and ears are usually removed. The tongue, and sometimes even the feet and heart, may be included.

Head cheese may be flavored with onion, black pepper, allspice, bay leaf, salt, and vinegar. It is usually eaten cold or at room temperature as a luncheon meat. It can also be made from quality trimmings from pork and veal, adding gelatin to the stock as a binder.

Historically, meat jellies were made of the cleaned (all organs removed) head of the animal, which was simmered to produce stock, a peasant food made since the Middle Ages. When cooled, the stock congeals because of the natural gelatin found in the skull. The aspic may need additional gelatin, or more often, reduction to set properly.


If so, it seems more like what we would call head Cheese or even a reach on a pate...Scrabble, well it is more, kind of hard for me to compare it to much!

Spam is better then Scrapple...but, just one mans opinion, I love Spam! Spam is just good old pork shoulder and spices, how can you go wrong with that!
Burnt By The Best
Competition BBQ Team

Scrapple, also known by the Pennsylvania Dutch name pon haus,[1][2] is traditionally a mush of pork scraps and trimmings combined with cornmeal and wheat flour, often buckwheat flour, and spices. The mush is formed into a semi-solid congealed loaf, and slices of the scrapple are then panfried before serving

But I might give homemade SPAM a go, a smoked version maybe in the Electric MasterBuild smoker.