After a 6 month wait since I paid my deposit, my set of Modernist Cuisine was finally delivered. The first print run was sold out, with none delivered to Australian bookshops. The only Aussies lucky enough to get a copy were those who bought from Amazon. As this picture shows, it is quite the tome: For those who don't know what it is, you can visit the website here.

Briefly - MC is the most important book on the science of cooking since Harold McGee's book On Food and Cooking was published in the 1980's. Nathan Mhyrvold is a former employee of Microsoft, and he has used his millions of $ to buy himself a fancy kitchen filled with the latest toys in the modernist kitchen. He has put together a crack team of research chefs, including some former employees of Heston Blumenthal and Ferran Adria, photographers, etc to produce this beautiful book. It comes in five volumes, with multiple recipes illustrating how modernist techniques can be used to enhance classic recipes, or create entirely new dishes which would be otherwise impossible.

Every page is a delight to read, and some of the photographs truly fill you with childlike wonder. Look at this one: 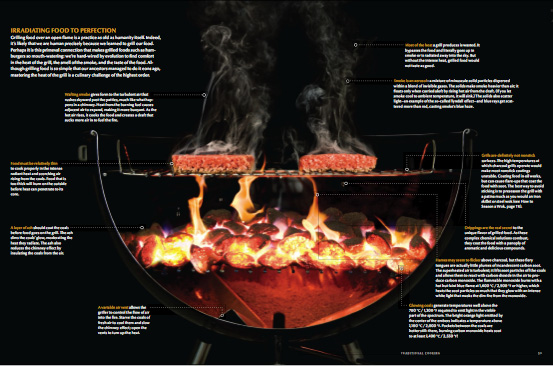 ... and imagine what it would look like stretched over two A4 sized pages in full colour.

Since this is a BBQ forum, it is the section on BBQ which is of special interest to us. When I have time, I will summarize the BBQ section (very quickly: you want a charcoal grill, not gas).

Downsides of this book - most of the recipes are inaccessible without special ingredients or equipment. The recipe for ribeye steak is: sous-vide for 75 minutes, then sear with a MAPP blowtorch. Not any ordinary blowtorch, a MAPP blowtorch. WTF do you buy one of those! With some recipes, you think to yourself - "cool, I can do that!!" and then you read the instruction: "Centrifuge at 33,000rpm for 30 minutes". The recipe for the Modernist Burger includes Liquid Nitrogen.

Some of the recipes seem to be quite superior to the traditional methods - e.g. the duck confit. The Modernist method calls for the duck to be cooked sous-vide - avoiding the need to buy a large quantity of expensive duck fat for a traditional confit. The Mac & Cheese recipe, which I will be doing tonight, avoids the use of Bechamel, instead using Sodium Citrate and Iota Carageenan as an emulsifying agent. Apparently, the flavour release of the modernist emulsifiers is superior to starch.

The book is quite expensive - $650 for the set. But it is well worth it. You won't find it at your local book seller. If you are in Melbourne, suggest you pop down to Books for Cooks in Fitzroy to browse through their store copy.

I'm pretty sure I bought my mapp gas burner from bunnings.

Having said that, IIRC it contains acetylene and while it burns hotter than LPG I have seen warnings not to use it for browning food.

Thanks for the tip, i'll be off to Bunnings to look for a MAPP blowtorch

Anyway, here are a few recipes from Modernist Cuisine: Modernist Beef Brisket. No rub. Smoke 7 hours at 65C, then sous-vide 72 hours at 63C. I made several batches of brisket so that I could taste them side-by-side, along with tasting notes. Modernist duck confit. Cure duck in salt and spices for 6 hours, then sous-vide at 60C for 48 hours, then fry to crisp up the skin and serve. This is superior to the normal method because you avoid using large quantities of expensive duck fat. There is no flavour loss due to loss of volatiles, so the flavours are concentrated in the meat. The meat was as tender as a traditional confit, but even more packed with flavour and cheaper to make. A definite win. Modernist Macaroni & Cheese. The macaroni is cooked in just enough water for it to absorb (so you are not throwing out starch when you fish out the macaroni when you cook it the traditional way), then a cheese mixture is added. The normal way of making the cheese mixture is to make a Bechamel, then add the cheese into it. Simply adding cheese would cause it to split. The problem is that the flour in the bechamel binds up the flavour, so there is no point in using good cheese as the flavour would be muted. The Modernist way uses Iota Carageenan and Sodium Citrate as emulsifiers, and calls for aged gouda and cheddar. The result is amazing - it looks like a normal Mac & Cheese, only it tastes of the best cheeses in the world!

So far I am still cooking my way through the book. There are only 2 of us, and I produce more food than we can eat.

Amfibius wrote:
So far I am still cooking my way through the book. There are only 2 of us, and I produce more food than we can eat.

I am cooking the Captain's chook Maryland for 5 people on the Kamado tomorrow and was feeling smug. A little deflated after reading your post, Keith.
Top

In reference to the duck confit....sous vide for 48 hours!!

Bloody hell!! even at a low 60C, the energy ( fuel..eg gas or elect) required to keep going constantly for 2 days would make that a very expensive duck...wouldn't it?
Think I'll keep it in the smoker......foil is a lot cheaper.

Er, not really. My sous-vide controller switches off the slow cooker when the temp goes too high. It switches it back on when the temp drops too low. The slow cooker uses very little energy to heat up the water once it is brought up to 60C. If I was using an immersion circulator in an open water bath then energy loss would be higher.

wow, what can I say? I've looked at those books online, dismissed them, looked again, then decided to buy wine instead

Hey Amfibius - thanks for the mention

Yes there is a shop copy on the bench instore and its available to all to browse/read - even take the odd notes from.

The eGullet forum also has large boards devoted to the book and stuff people have tried. There is also a small forum on the Modernist Cuisine website

We have plenty of stock now and if the price is an issue - we do offer layby etc...

The Mac Cheese looks amazing - we've had other customers tell us the same thing...well worth the try. Please keep posting the photos - its exciting to see what comes out of this 'brick'
Top

Would love to get my hands on a copy.

Duck Fat is great for cooking and I found it in my local IGA.

Oh yeah, forgot about this thread ... thanks for bumping it ... modernist ribeye steak, sous-vide then browned with a combination of grill and MAPP blowtorch.

Hey B, I am in Canberra at the moment. I will be back in Melbs by the end of next week. Yay! This place is bloody cold and I am limited to eating whatever I can get within walking distance (i.e. not much!). I will probably be free on the week that the OCAU competition starts. You are welcome to come over and have a look at the book / sample my entry if you like