Figured I'd start a bit of a thread documenting my journey to learning how to use my Pro Q Elite smoker, the trails and tribulations of learning how to cook amazing foods with coals. I'll update this thread as I go through a cook as well.

Today marks my 3rd run on the smoker. So far i've run into a few issues on both of my previous burns. So far all burns have been using lump charcoal.

First run was a basic roast. I didn't stack the fire box enough and after peaking at about 230F, the coals quickly snuffed and I struggled to maintain a temp over 190F. Figured it was an issue with lack of charcoals and a poor pack on the fire basket combined with me rushing to get the food on. After about 9 hours of playing with it, the roast was edible, but dry.

2nd run (yesterday) was a cheap brisket from coles. I used a chimney starter to get the lump charcoal going, and packed the basket minion style. I feel that I didn't pack it tight enough, nor again, have enough charcoal. Again, the temp peaked at 250F then, no matter what I did with the vents, steadily dropped down to 180-190F. I pulled the top stacks off at one point and put a fresh chimney load in (about 3 hours into the burn) and topp the charcoals off, It peaks in temp again, then settled at 180F. Brisket was tough, decent smoke ring.

Today, after Davo's suggestions, I pack the fire basket to the top, pressed it down to make sure it was tight but still allowing airflow) and left and indent in the middle of the pack and poured a chimney load into the depression. Sealed it up with the water pan. left the vents open until the temp hit 210f, then closed the bottom vents off about 1/3rd the way on each. The temp stabilized at 230F, perfect. This took about an hour. I've then added a whoel chook with a garlic, lemon and oregano dusting on the top stacker.

Now, the smoker has run well for about an hour and a half. Just checked on it and the temp has dropped to 200F. The firebasket is still pretty full but i'm, yet again, losing temp. I've loaded a little more charcoal into the basket to see if that brings it back up while opening all the vents fully. If this doesn't help I'll open the front door and see if the extra airflow brings the temps up again.

Determined to get this bugger running well. I'll use this bag of lump, if I'm still having issues maintaining the temp i'll try Briquettes and see if that improves my temp holds.
Top

Lump charcoal can be a bit hit and miss particularly if it's the imported stuff. I'd recommend practicing with heat beads for a few cooks to get used to driving the Pro Q. Vent management takes a bit of getting used to, where the smoker sits (sun or shade), ambient temp, breeze all play a part.

It took me a few goes to get used to mine also but now I love it.
Vegetarian is an old Indian word for bad hunter.
Top

So a couple more charcoals, and opening all vents full has got my temps back and sitting pretty at 230F.

Another couple of hours and the chicken should be done and done.
Top

And now we wait. 195F at the thickest point before it came off the smoker. Resting before I pull it apart.

Clear fluids when poked with the thermometer.

Slightly pink on the very edges, assuming that's smoke. Rest of it is white and tender.

Pics when I cut it apart 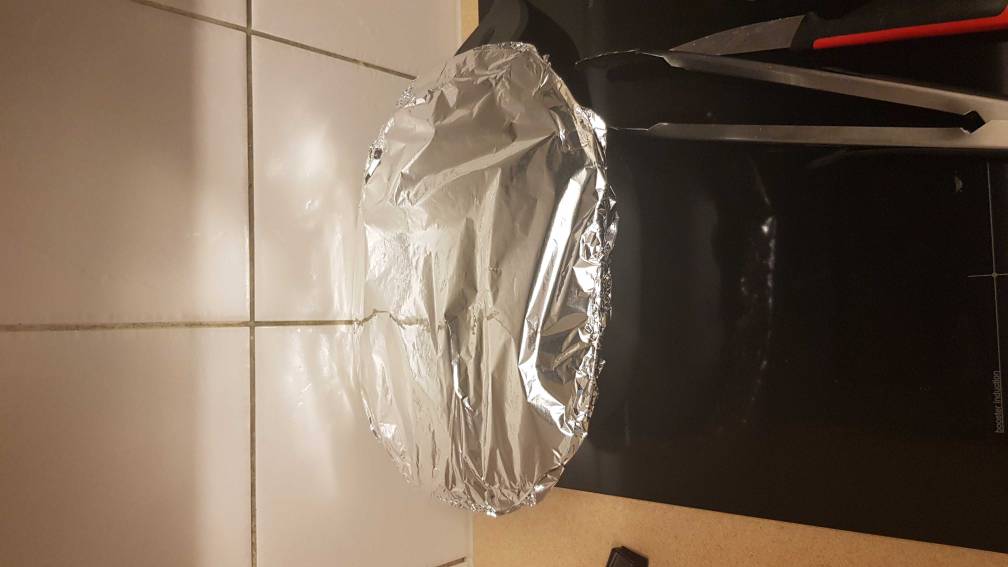 Photo's of the finished product?
Top

Before it was consumed. Very tender, slight smoke flavour 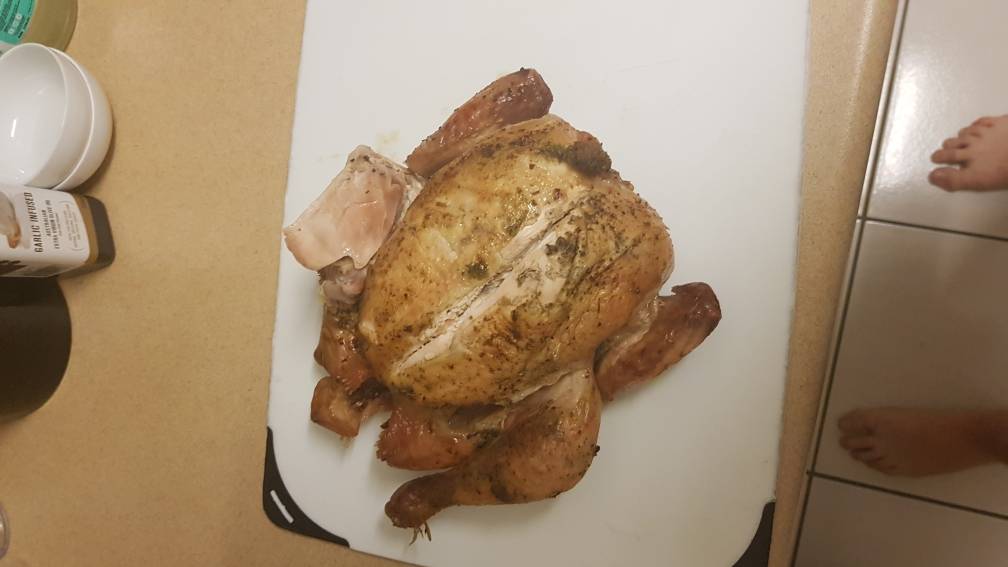 Another run with the ProQ today.

Chicken smoked with apple wood, coasted in a lemon and garlic rub again.

Got a new bag of dry lump as the last bag got soaked in the recent rains. Turns out my shed isn't as water tight as I thought....

Just approaching 230°F and waiting on the temps to stabilise. 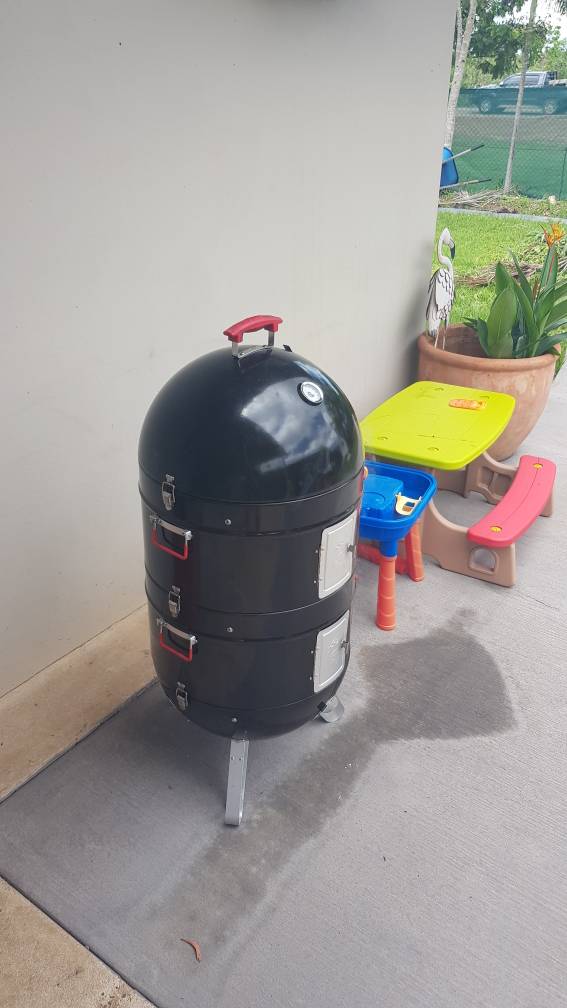 The water pan dried out so it was peaking past 260°F when I pulled it off, but it gave the skin a nice crust. Temps at the breast 170°F when I took it outta the smoker.

When taking the chicken off th skin cracked and some juices escaped, but very tender and moist.

Let it rest for about 30min before pulling it apart
Very moist and tender, the apple wood smoke has given it a nice sweet yet smoky flavour. Very happy with how it turned out.

Still have to fight the old "pink chicken is bad" for you and remember the temp is key, and the pink is a result of the smoking.

Finally, happy to say I'm confident I've got the temp control issue nailed. For my climate, having all vents wide open bar one closed about 1/3rd held temps beautifully at 230°F for the entire cook. 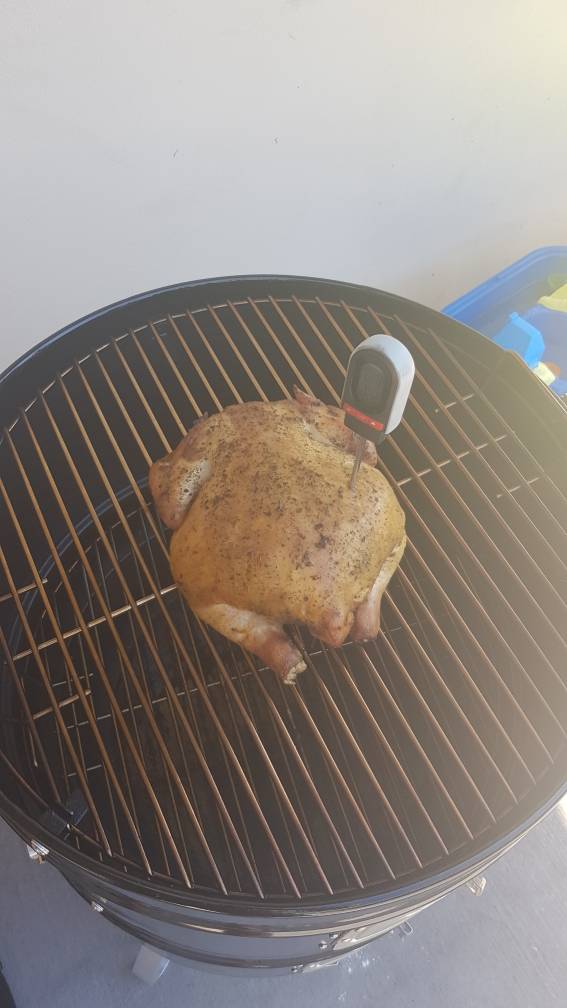 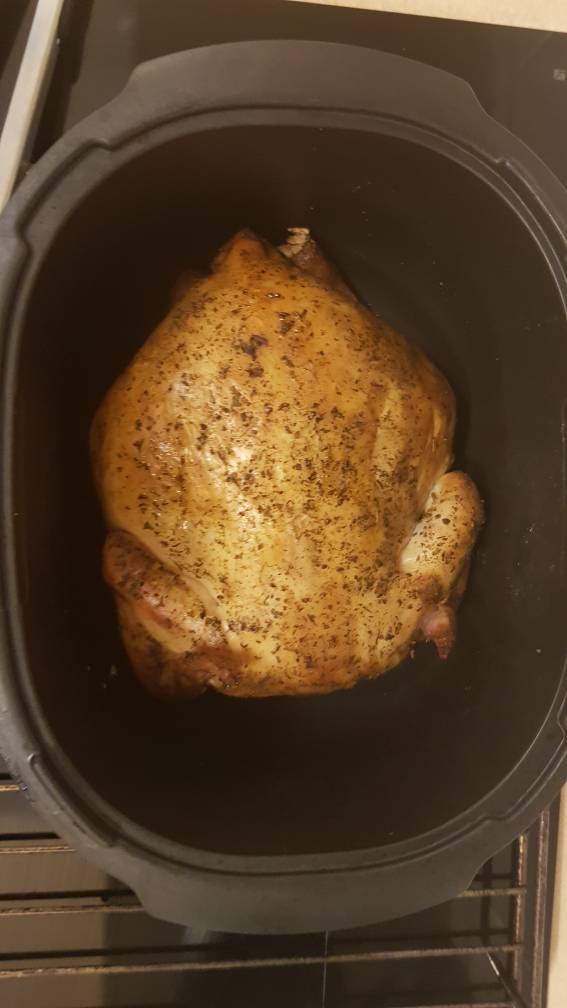